On May 4th, Josh and I participated in the American Heart Association Heart Walk. I saw a posting at work so I decided to sign up and join the company team. I was really glad I did because it was an awesome time! The St. Louis Heart Walk took started at Busch Field and ended with a victory lap around the warning track.

I wanted to participate in the Heart walk both because I saw it as a potential networking opportunity and because I genuinely want to support the AHA. My life has been touched by heart disease and stroke, two of the diseases the AHA is dedicated to prevent and study. In addition, the AHA supported my graduate work with a pre-doctoral fellowship for two years! If you want to find out more about the AHA and their mission or donate money to their cause please visit their website.

Now, back to the actual event! The walk was scheduled to start at 9 AM and we were supposed to be in the stands by 8:30 for the opening ceremonies. Josh and I got up at 6:30 AM and headed for the train station. The St. Louis Metro has stops at all of the major sporting stadiums as well as the convention center and airport which makes it very useful when you don’t want to sit around in horrible stadium traffic or pay for parking! When we stepped off the platform I got my first look at Busch Field.

We walked right in through the turnstiles after a quick stop to have my purse checked. As we entered we got a map of the course and a couple of backpacks to carry our stuff. There were a bunch of vendors set up in the concourse of the stadium, including a booth sponsored by my company. We walked around looking at everything and figured we’d hit it after the event. This turned out to be a mistake because everything was packed up by the time we finished the walk!

After perusing the booths, we headed into the stadium to mingle and wait for the opening ceremonies. 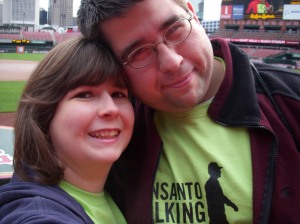 The Cardinal’s mascot, Fredbird, was out doing some silly things to entertain the crowd. 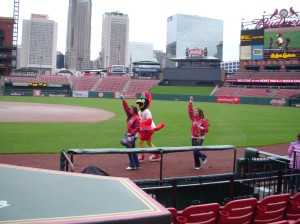 The stadium is really cool! Josh and I definitely have to see a game there! You can see the Arch from inside the stadium.

While we were waiting for the festivities to start, we noticed that one of the grounds keepers started mowing the grass!

The opening ceremonies were mainly about how to prevent heart disease through diet and exercise modification. There were several inspirational stories from people who had survived heart disease or who had reduced there risk by losing weight. There were also some appearances by local sports stars, Ozzy Smith and Austin Pettis. 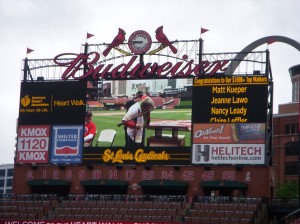 After a 5 minute warm up, we all marched out of the stadium and started our walk. 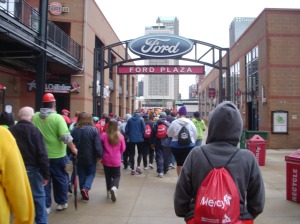 The day was grey, cool and drizzly but there were still tons of people! The stadium looked half empty but when you saw everyone walking you could tell that there were a lot of people.

Here we are on the move! 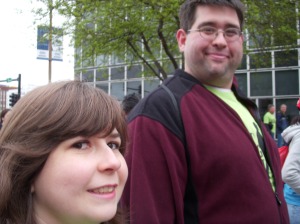 The first mile of the walk started at the stadium and walked in a loop around downtown. We got to walk past the Arch which is the closest I have been to it so far! I stopped to take a picture. 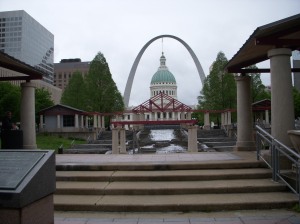 It was really neat walking though the streets of St. Louis! 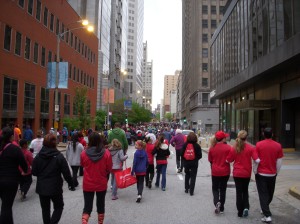 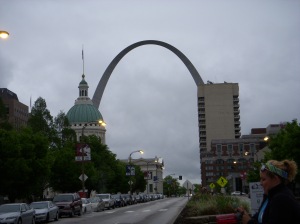 On our way back to the stadium we also walked through the City Garden, which is full of large artwork. It is similar to Laumeir but in a smaller scale. We didn’t take any pictures because it was full of people tromping through it.

The first mile of the walk ended at the stadium and a surprising number of people just went straight to the parking lot instead of going in for the “victory lap!” We were set on doing the 3 mile version of the walk so we continued past the stadium into a slightly shabbier part of town. After a few yards we actually entered into the Purina Complex where we walked another mile.

There were pictures of dogs and cats on all the street lamps. I could see the Budweiser Brewery from where we were walking but it was too far to get a good picture. 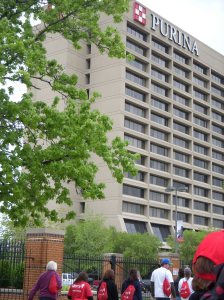 After walking around the Purina campus we headed once again for the stadium, this time for our victory lap! 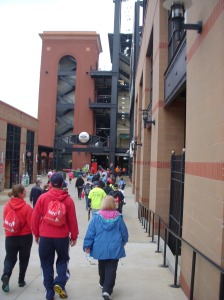 Walking on the warning track was very cool! There were several stadium employees keeping careful watch to make sure none of us tried to step on the grass. It was really hard to take a picture that showed we were on the field! 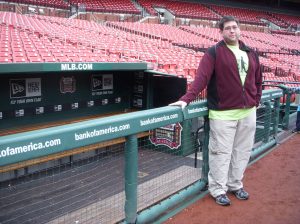 Here is another picture of the dugout.

And we noticed these great carvings of cardinals.

We took one final self portrait and then called it a day.

After finishing our walk we grabbed some apple slices and headed for the train. We decided to go to the Delmar Loop on the way home to check out free comic book day at Star Clipper. They had a great event set up and Josh had a great time! We didn’t take any pictures so we can’t share them with you but trust us, it was a good time!

When we got home we collapsed of exhaustion and took a 3 hour nap!