In February my friend Dorothy and her husband Cris visited us from New York. We have a giant list of touristy things we want to see in St. Louis and this seemed like a great time to cross some of them off the list. One place I have heard about since before I moved to St. Louis is the City Museum. The City Museum is housed in an old shoe factory, the International Shoe building. The museum is full of interesting re-purposed architectural and industrial items. It is hard to describe the museum. The museum is a hodgepodge of interesting structural art, much of which can be touched and climbed. The museum is very popular with children as there are so many things to touch, climb and slide. However, it is equally popular with adults and has been rated one of the best places in St. Louis to go on a first date. The space was also extremely difficult to capture with my point and shoot camera, which is my way of warning you that most of my pictures are pretty bad.

The City Museum occupies about 3 floors, plus the roof.  We didn’t get up to the roof on this trip because it was closed for the winter. I guess Josh and I will have to visit again to get the full experience. The first floor had a bunch of interesting areas to climb, many of which also had slides. There was also an entrance to some caves. 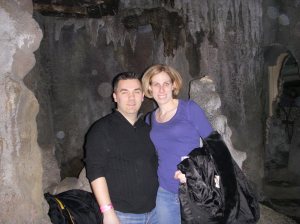 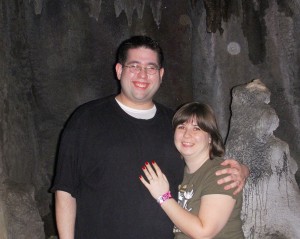 Dorothy wanted me to show off my ring!

The caves were particularly popular with children who could squeeze themselves into all of the tiny cracks and crevices. We didn’t venture too far into the cave area because it involved a lot of crawling on the ground. The area of the building with the caves was previously used for moving the finished shoes from floor to floor. It was a large open area that was 10 floors tall and included a bunch of chutes for the shoes. These chutes have been turned into slides. The museum boasts a 10 story slide but we only made it up about 6 floors before we found a broken slide and chickened out. We did take the slide from the 6th floor. It was only about 2 stories of continuous sliding before you had to change slides and eventually just walk down stairs the rest of the way.

The second floor held a pizza restaurant, a shoe lace factory (so cool!) and the most unusual aquarium I’ve ever seen. I decided I have too many pictures for one post so I’ll tackle the aquarium in another post. The second floor also had a bank vault and some PO boxes. 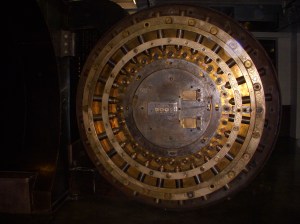 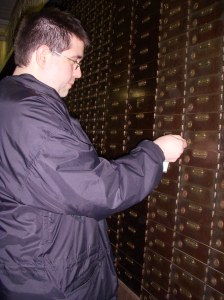 There was also a giant wheel that everyone got in and ran in like hamsters. I think it was donated by McDonald-Douglas and had been used for making airplane fuselages. Josh and Cris had a great time trying to run in the hamster wheel.

Josh tried to help from the outside…

Some interesting posters and a sculpture of St. George from a Catholic church in Chicago were displayed in one of the rooms. 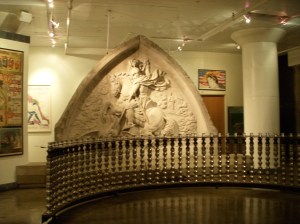 There was a slide that went down to the first floor but the line was too long so none of us went down it. I think there might have been a slide from the third floor as well but there were lots of slides and everyone was clamoring to ride on them.

The third floor was much quieter than the previous floors. There was a cool model train display that you had to crawl into a cave to get to. But once there you were on eye level with the model town.

Eye level with the miniature train

There was a bigger train that was out of commission which was too bad because it looked like it was a fun ride. We also saw a neat sculpture made up of organ pipes. There were even theater seats so you could sit and look at it. I wish the pipes were still functional and that there was some interactivity where you could actually “play” them. 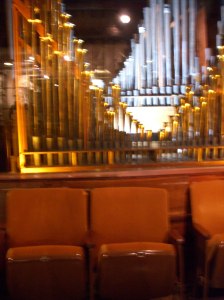 The room next door was filled with old arcade and pinball machines. This lead into a little snack stand and a reading area with lots of books and comic books for everyone to peruse. I think Josh could have found a way to pass a few hours there. The kids all flocked to an indoor skate park where skating is not allowed but running and jumping are encouraged. The third floor was also home to an interesting display of architectural embellishments. There was a room full of gargoyles and cornices, a large display of doorknobs and a wall of stained glass windows. Many of these items were scavenged from buildings that were going to be demolished. I thought this was one of the most interesting parts of the museum but I bet most of the kids thought it was the most boring part! The room opened up to a large bar and an empty room which I bet could be used for a wedding reception or other party. 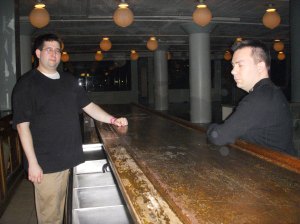 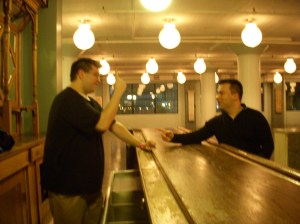 This is what happens when you don’t pay the bill…

We all had a great time at the City Museum but I think Josh had the most fun. He took off like a shot the moment we were inside and was running around like a kid. The only funny part was that he would look at some structure to climb and test it with his foot and then back away from it, afraid it wouldn’t hold his weight. When we go back I plan to carry a smaller purse and leave the coats in the car. Carrying a bunch of stuff around really hampered our movements and was a pain to keep track of. Plus I was worried my purse would get scratched or dirty as I was dragging it around. I was surprised at how loud and chaotic the museum was and it took me a little while to get in the spirit of things. We will definitely go back to see the rooftop area and ride the Ferris wheel. Though we might try to go even later at night when kids aren’t allowed so that we have more access to some of the popular areas!

If you are interested in the City Museum you should definitely check out their website. They have better pictures and some more information. However, if you want to find out more of the history of the museum, you might want to check out the Wikipedia page as I found there was a lot of interesting history I couldn’t find on the museum’s website.