Josh’s Parents came out to visit us the weekend after Thanksgiving. It was really great to see them. Since I am between jobs at the moment, we can’t afford to go visit our families for the holidays this year. Josh’s parents and brother drove from Pennsylvania and we only had about a day to spend with them so we wanted to make it count. Josh loves zoos as anyone who has spent time on this blog probably knows. He was begging us to go see Wild Lights at the St. Louis Zoo.

The St. Louis Zoo is free but the Wild Lights event was a ticketed event priced at $5 per person. We actually got to the zoo a little early and wandered around for a little while before it closed. I’ll put up the pictures from that part of the trip in a separate post in an effort to keep these posts concise. After the zoo closed for the evening, Josh and I got our tickets and headed to the parking lot to meet his family. We all got in line to wait for the zoo to reopen for the evening. It was freezing in line, especially since Josh and I had just walked around in the cold for about an hour. (It was unseasonably cold that weekend which is funny because this past weekend was unseasonably warm!) 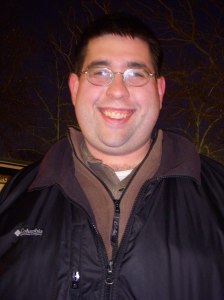 Look at Josh. He was thrilled he talked us into this…

Only a few animal habitats remained open during Wild Lights, primarily the Penguin Habitat and the Bug House (sponsored by Monsanto). In addition to the animals, there were Christmas lights in the trees as well as animals and other characters that were made of lights. It was very festive. 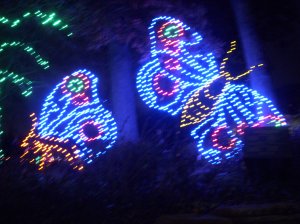 These butterflies were outside of the Insect House

Josh points out the crystal Jaguar

Some of the Christmas lights were in motion like these prairie dogs. (Sorry for the blurry pictures…I am not a great photographer at the best of times and when you remove sunlight or a flash I am even worse!)

In addition to the lights, several of the statues were decorated. This Elephant statue had a wreath around its neck. 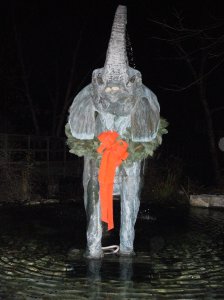 I was really impressed with the Penguin and Puffin Coast habitat. It reminded me of the type of exhibit they have at Sea World. (I think it was designed by the Sea World people…) There was a pool outside where the penguins could play and a large area inside with a pool and a bunch of rocks to climb on. Outside of the exhibit there were a bunch of Penguins that were made of lights. 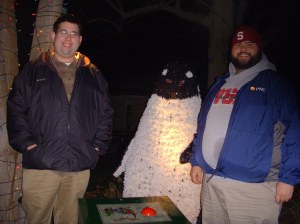 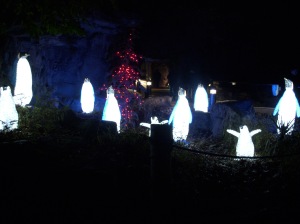 Here is one shot inside the Penguin Coast. I took a bunch of pictures earlier in the day which I will post later. (I’ll link to the post once it is up.)

The Carousel was also open. It cost extra but I love Carousels so Josh and I decided to go for a ride. I tried to get a picture with the animals in the background but I failed. However, it is a really cute picture of us.

There was a cute gingerbread house made of lights and a storytelling area with a life-size gingerbread man. Those characters were a hoot they were really giving Josh and Jordan a hard time! 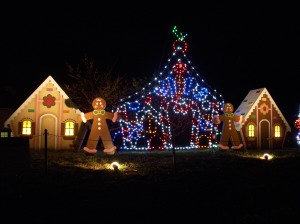 After the Carousel and the storytelling area, we decided to stop by the food court for some hot chocolate. Josh also decided to buy us a s’mores dessert. They looked like little ravioli. The s’mores were ok, they tasted a little like Pop Tarts.

After the snacks we roamed around a little more and took a few more pictures in the front of the park where there was a statue of some seals and a giant swan.

Josh and Jordan perusing the map of the zoo

We had a really great time! The zoo was a lot of fun (though I’d like to go back when it is a little warmer) and Wild Lights was a great Christmas activity. It was very festive and the price was very reasonable. I would definitely consider going back next year!

One thought on “Wild Lights at the St. Louis Zoo”