Pumpkin carving is one of my favorite parts of Halloween and has been since I was a little girl. I was really bummed out in college and grad school because I couldn’t figure out a good way to carve pumpkins. In college, it seemed like a bad idea to have a pumpkin with a lit candle in my dorm room. Plus, keeping pumpkins inside is a recipe for a moldy pumpkin. In grad school I had an apartment but no balcony to display the pumpkins. One year, I carved a plastic pumpkin and it turned out great. The problem is that you don’t really need to carve a new one every year. Plus, I thought it was a little on the expensive side. I was really excited when I moved into this apartment because the balcony is a great place to display a some Jack O’ Lanterns!

When carve a pumpkin I use a kit like those sold by Pumpkin Masters. For those of you who have never used Pumpkin Masters I’ll give a brief explanation about the method. Basically, you choose a design from the book (or you could draw your own design on a piece of paper.) The design is transferred to the pumpkin by poking holes along the lines of the design through the paper onto the pumpkin. Then each piece is carved from the pumpkin using little saws to connect the dots. This method is not only safer than traditional carving with a knife but gives incredible results. If you have ever seen really intricate pumpkins on TV (like on the 90’s sitcom Home Improvement) they were probably carved with this method. My family has been using Pumpkin Masters kits since I was 5 or 6 and we have one of the first kits that was ever sold. Mom and Dad were really worried about the someone getting cut with a kitchen knife and they wanted an alternate approach. After trying it out we were all hooked!

I mean, look at these results! Could you do this with a steak knife?

One thing we have learned over the years is that in a hot, humid environment like Houston or Little Rock, you can’t carve your pumpkins early because they will quickly rot. It seemed like a waste to go to a pumpkin patch but not carve the pumpkins, so Josh and I carved our pumpkins even though it was a little early in the season. These pumpkins lasted about a week before I had to throw them away. I had a second pumpkin carving party closer to Halloween so that I could have some Jack O’ Lanterns out on Halloween night. (Not that it really matters since I don’t get any trick or treaters at my apartment.)

Pepper is helping us carve our pumpkins

Last year in addition to the Pumpkin Masters kit I also bought a kit with Disney designs because I thought Josh would like to try the Donald Duck design. This was Josh’s first time using the Pumpkin Masters approach and the Donald design was more challenging than we thought it would be. He had a hard time with some of the thin lines (especially around the eyes) but his pumpkin still looked good when we lit it. 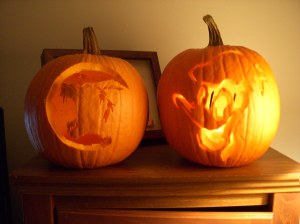 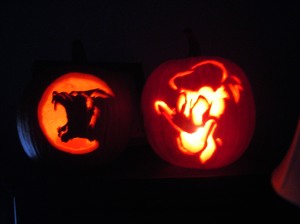 I carved the wolf and I was pleased with how it came out. See what I mean about how these pumpkins look totally professional!

I am not in any way affiliated with Pumpkin Masters. These are my own opinions about the product I have not been compensated by them in any way.