Last week I was telling you a little bit about what Josh and I did last October when he came visited me. If I recall correctly, I had just gotten into Groupon (with the exception of the iPad, I tend to be a late adopter…) Anyway, I bought several Groupons with to try to save some money. I got one to help us pay for our dinner at Capriccio Grill and one for a pumpkin patch in Scott, AR.

As I have previously mentioned, Josh and I love Autumn. Since we love things like apple orchards and hay rides, I thought we would have fun at the pumpkin patch.

We were really looking forward to this outing. For starters, since it was in Scott we decided to get lunch at Cotham’s Mercantile. Cotham’s is best known for their “hubcap hamburgers” which are as big as a plate! We first heard about this place on Man vs Food and decided to try it out when I first moved here. The food is delicious and we have been back several times. In addition, the hubcap hamburger is big but not too big for Josh to eat without a problem. They have some really great southern sides like onion rings and fried green tomatoes. One of the most interesting things about Cotham’s is that the restaurant is inside an old mercantile and they have many of the original fixtures still in place and items that would have been sold there lining the walls. The building actually looks so old and ramshackle that you are afraid it might crumble at any moment.

After a delicious lunch we drove around and eventually found the pumpkin patch. We were excited because there was supposed to be a petting zoo, pig races, a farmers market, and a hayride. They did have all of those things, but it was all a bit smaller than we had thought it would be. I think if we had kids with us we would have had a lot more fun. Still, you can’t keep Josh from feeding animals at a petting zoo…

We also found this neat hay bale sculpture of a pig and had to get pictures with it. 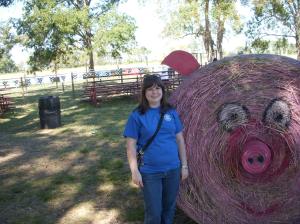 We watched some pig wrasslin’ and went on a hayride. Then we checked out the farmers market and bought a couple of pumpkins. 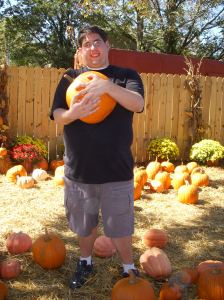 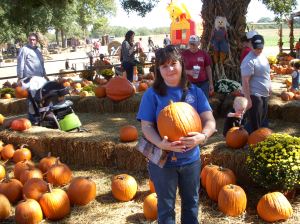 I love carving pumpkins. It is one of my favorite parts of Halloween and last year I actually carved 3 pumpkins at two different occasions but that is a tale for another day…

One thought on “Pumpkin Patch Hijinks with Mary and Josh”