In June I went to St. Louis to visit Josh. I took advantage of the fact that the flight is only 45 minutes long and left at the crack of dawn on Saturday morning, arriving in St. Louis by 8 or 9 am. Josh took me on a little tour, showed me his apartment and then we headed to the St. Louis Renaissance Faire. 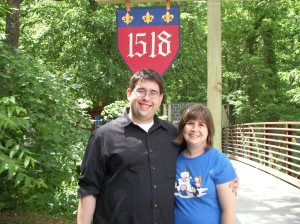 I was surprised when Josh suggested going to the Renaissance Faire as he has always been hesitant about going to the one in Pennsylvania. We had a really good time which surprised him a little.

As you can see in the above picture, this faire was set in 1518 France (so you can’t see the France part, you’ll just have to trust me on that one!) It was located in a park in what I think is a permanent facility for the faire. For more information about the St. Louis Renaisance Faire, you should check out their website. The faire was large and had a good number of restaurants, shops and a nice big area for jousting. 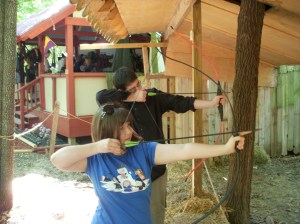 Our first stop was the archery booth. It was so much fun and it turned out to be one of the most popular booths. We tried to stop by several other times only to find a really long line!
In addition to the archery booth, they also had booths for knife throwing, axe throwing and ninja star throwing. We didn’t do any of the other activities, but we probably should have. I guess it leaves us something to do next year! 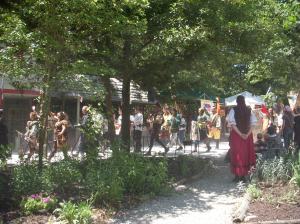 The Royal family was constantly parading around the park. 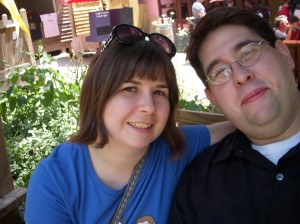 It was so hot that day! We only stayed for a few hours because we really couldn’t take the heat anymore! We had lunch at one of the restaurants. I had chile in a bread bowl and Josh had a meat pie. He really should just move to England because he loves meat pies! He even thought the human meat pies in Sweeney Todd looked delicious. We also sampled some beverages. I had a hard cider and he tried some mead. Later we had drinks that were 1/2 Guinness and 1/2 apple cider. Delicious! 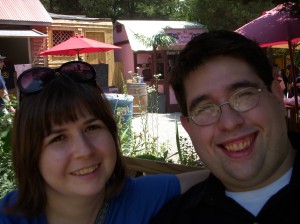 We also found the Apothecary and had a really interesting discussion with some scientists who were running the booth. The experiments they were demonstrating included making a pH indicator out of cabbage and staining cloth with indigo.

And last but not least, we saw 2 jousts! I think we would have watched the third joust if we had not been dying of heat exhaustion.

Look at how hot I am!

Anyway, we ended up on the side of the “bad guy” Sir Malcolm whose battle cry was “Cheat to Win!”

I don’t remember the name of the “good guy” because he was really boring! 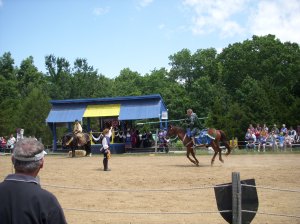 Both of the jousters were really good and got most of the rings. The third “joust” would have been a battle to the death!

We had a great time and would probably go again. I don’t think it was the best Renaissance Faire that I have ever been to, but it was still very fun and the facilities were really nice.

One thought on “The St. Louis Renaissance Faire”