I think this recipe is based on a recipe for shredded beef enchiladas from the Better Homes and Gardens Mexican Cookbook. We’ve added to it a little over the years by adding peppers to the meat mixture. Dad likes to add a can of diced green chilies while I prefer to add a couple of poblanos and jalepenos.

Combine all ingredients in a medium saucepan and bring to a simmer. Continue to simmer meat for two hours or until tender. Remove meat with a slotted spoon but reserve broth.

Enchilada meat after it has been simmering

Cool meat to room temperature and shred with two forks. I think the key to great enchiladas is keeping everything very moist. I like to add a couple of spoonfuls of the reserved broth or enchilada sauce to the meat. You don’t want it swimming in sauce, but enough to moisten it.

As for sauce, we have used several varieties over the years and canned sauce works as well as anything else. Currently, I try to use the Lawry’s enchilada sauce when I can get a packet. I make the sauce as described on the package but I like to add a little of the beef broth to thin it and for flavor. Make sure to reserve some sauce to make Spanish rice!

All that is left is to put some meat and cheese into the tortillas and roll them up. I use feta cheese but the enchiladas are good with just about any kind of cheese. Place the rolled tortillas into a 13×9 inch pan that has a layer of enchilada sauce on the bottom. 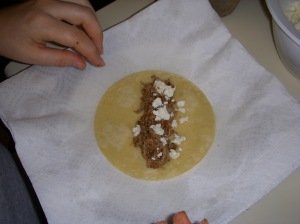 Once all the enchiladas have been added to the pan, cover with sauce. Make sure to get the ends of the enchiladas or they will be crispy and tough. You can put more cheese on top of the enchiladas. Bake at 350 fot 20-30 minutes or until hot and the cheese is melty (unless you are working with feta which never really melts.) 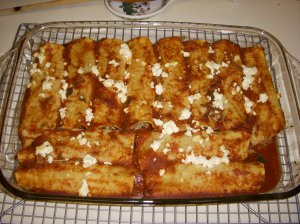 This recipe was adapted from the Better Homes and Gardens Mexican Cookbook.