I planned to make these when Josh visited as a way to finish up the rum. Sadly, we ended up not really drinking that much. The mission was not accomplished! I bought most of the ingredients before he got here so I decided to use them anyway. (I did end up having one Pina Colada during Josh’s visit while we were playing Lego Pirates of the Carribean…it seemed fitting.) 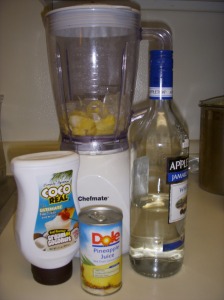 About 1 cup of ice

A handful of frozen pineapple chunks

1 small can of pineapple juice

Blend everything together and pour into a fun glass. You can garnish with a pineapple slice and a maraschino cherry if you have some around. This recipe is based on one of Martha Stewart‘s cocktail recipes. It makes one large drink that could easily be shared. 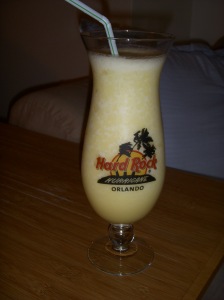 I saw a bunch of lower calorie options for Pina Coladas that I had been planning to try. I went with this more classical version because I thought Josh would like it better. (Cream de coconut is really high in fat. Many recipes substitute coconut water or coconut extract to get the flavor of coconut without the fat.) This recipe makes a lovely drink though I have had a hard time finishing the whole thing by myself!