Josh and I decided to spend the Fourth of July at the Peabody Hotel in downtown Little Rock. The hotel was great! We had a river view room with a king bed. 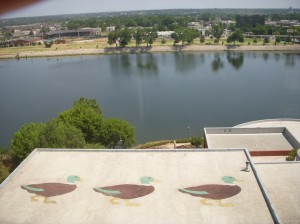 Look what we could see from our room!

We’ve been to the restaurant in the Peabody several times and we’ve always wanted to stay there. The Peabody is a great hotel, exactly what we were expecting. The room was clean and spacious and there were tons of cute duck themed toiletries. I decided to pay the extra $10 to upgrade our room to a river view and I was glad I did. We had a great view of the Broadway and Railroad bridges as well as the baseball stadium across the river. The gym had nice new machines and was not crowded. We ate breakfast at Capriccio which definitely cemented the restaurant as our favorite place in Little Rock. 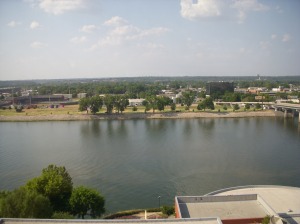 We had a great view from our room

The Peabody is known for the ducks that live in the fountain in the lobby. Every morning at 11 AM they march down from their rooftop apartment to the fountain and every evening at 5 PM they march back up to their penthouse. 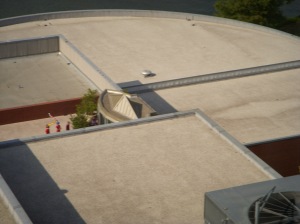 An aerial view of the Ducks’ penthouse

The story goes that in the 1930’s several hunters on their way home from duck hunting in Arkansas decided it would be funny to leave their live duck decoys in the fountain of the Peabody Hotel (in Memphis.) The guests loved it and the hotel management decided to let the ducks live there permanently. Later, in the 1940’s, a bellman who used to work for the Ringling Bros. Circus offered to teach the ducks to march to and from their penthouse apartment everyday to the King Cotton March by John Phillip Sousa. It is a tradition that they continue to this day.

We’ve seen the ducks playing in the fountain but we had never seen them march in or out. It was on our must do list while we were staying in the hotel and we ended up seeing both performances.

The ducks begin their evening journey to their rooftop apartment 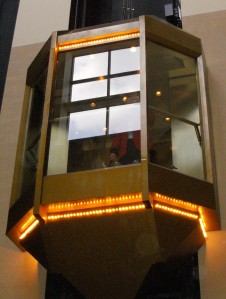 You could see little duck heads peaking up in the elevator

Josh pretends to be one of the ducks 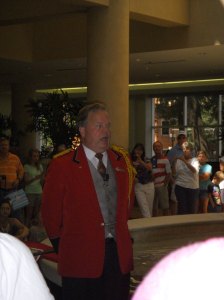 The Peabody Duckmaster tells us the history of the ducks 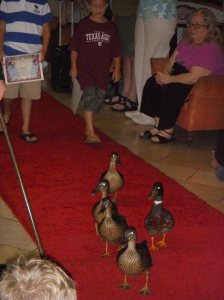 The Peabody is serious about the ducks! We saw ducks everywhere in and on the hotel.

There are ducks everywhere on this hotel!