We had a really great 2012 here at No Meat No Meal and we hope you all did too! We’re also looking forward to 2013 and all of the great things that are in store for us!

Josh and I had an exciting last weekend of 2012 but not as exciting as Barbara and my parents. They all got to go cheer my sister’s Alma Mater to victory at the Alamo Bowl! Josh and went to the Ticket City Bowl last year so we have some idea how exciting it was (though the Alamo Bowl is obviously a much better and more exciting bowl!)

Josh and I spent the 29th having a lot of fun. We went to see a movie at one of those theaters that serves food. It was pretty cool but the service was a little lacking.

We both had jalapeno cheeseburger which was very tasty but I think I’ll try the chicken fingers if we go again. I dragged Josh to see Les Miserables and he actually had a pretty good time. I think he liked the movie more than he thought he would and he even agreed to see the stage show if it ever comes through town!

Later that night we went to a nearby town, Kirkwood, to see their New Years fireworks display. Apparently, all of the local towns had to call off their Fourth of July fireworks this year because of the drought. Many of them decided to use the fireworks on or around New Year’s Eve instead! 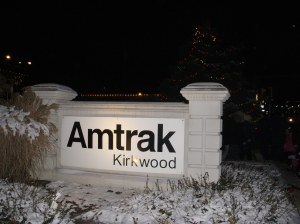 We got there a little early so we had time to walk around the town and grab a slice of pizza before heading to train station to watch the fireworks. On the way we got to see some Chinese Dragons dancing to celebrate Chinese New Year.

This is the best photo we got of the dragons…

The fireworks were ignited from the City Hall which was only about 50 feet from where we were standing! We were so close to the fireworks we could see the ashes glittering as they rained down! 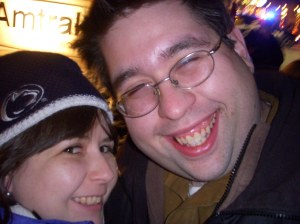 Here are a couple of shots of the fireworks. The show was 10-15 minutes long and we thoroughly enjoyed it. 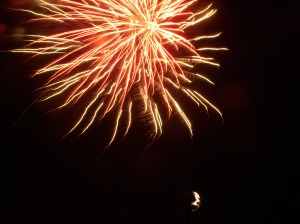 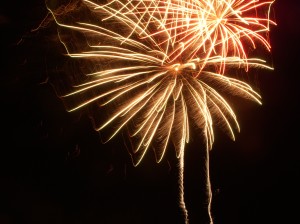 It had snowed a little the previous day making a magical scene. The snow was just enough to give everything a wintery gleam without  making the streets too slippery.

Josh had to work on the 31st so I sat at home watching it snow.

Josh and I had such a good time at the Kirkwood fireworks that we discussed going to another show in a different town on the 31st but after it snowed all day we decided to stay home and watch TV instead.

Hope everyone else had a great New Year’s Eve!