While we are celebrating the return of College Football, I thought I’d share some of our pictures from the 2012 TicketCity Bowl. 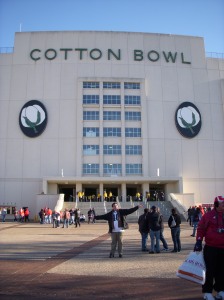 Of course, the TicketCity Bowl occurred after the November revelation that Jerry Sandusky had molested children in Penn State locker rooms and after the firing of Joe Paterno. PSU had a good season up to that point. We went 9 – 3 that season and in any other year we would have been at a much better bowl. Similarly, Houston had a tremendous year (12 – 1) with their only loss in the conference championship game. So despite being one of the newest bowls, it was shaping up to be evenly matched with two excellent teams. It was also played in the historic Cotton Bowl (the actual Cotton Bowl is now played in the Cowboys Stadium) on January 1st! How can you ask for more?

Josh and I decided to go to the bowl for a couple of reasons. First, we were already in Texas visiting my family. It would only be a few hours out of our way to stop by Dallas on the drive back home to Arkansas. Secondly, no one wanted to go and I was able to get the tickets for a steal! I even bought them on the TicketCity website! Finally, we wanted to support the team through a difficult time. 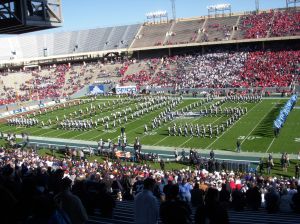 We drove up on New Year’s Eve and spent the night in a La Quinta that was only a few miles from the stadium. We picked up some beer because we thought we would to a little tailgating and we got to bed early. Josh and I decided to head for the stadium early because we were not sure how crowded it was going to be. It turned out that we shouldn’t have been worried at all!

Look at how cold I am! This icy beer is just what I want right now…Yum!

Oh, and it was soooooooo cold! It had been pretty warm for the entire week we’d been in Houston so we were surprised it was so cold in Dallas for the bowl. I definitely did not have a warm enough coat and I was missing my scarf and hat which I did not bring because I thought it would be warm. Later, I purchased a sweatshirt and immerdiately put it on over my other sweatshirt and I was still cold! We had a disappointing breakfast from McDonalds (largely because Josh used big words like substitute when he was ordering. He ended up with coffee instead of orange juice and no egg on his egg and bacon biscuit!) We then tried really hard to tailgate, but we were pretty much the only ones in the parking lot and it was too cold to sit outside for long.

We headed up to the stadium and got to see the players get off the bus. We also saw the Blue Band marching around the parking lot.

I bought a sweatshirt and we headed to our seats a little early. We walked around the stadium a little bit to check it out and to try to keep warm. 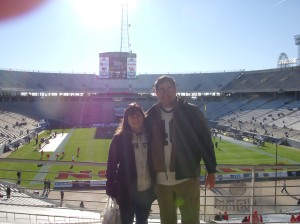 Our seats were pretty good but they were in the shade. We stayed in our seats for about half of the game before we started walking around looking for empty seats in the sun. The game was ok. Penn State lost 14-30. About a week before the game our quarterback got into a fight with another player and got a concussion. Needless to say, he didn’t play. Our back up quarterback just wasn’t up to the challenge. All of that being said, Houston was amazing. I don’t think our team really knew what to do with them! It was easy to see why they had such a good record and it would have been nice if they had gotten into a quality bowl. The Cougars certainly could have held their own against some of the best teams in the country.

All in all, it was still a pretty good day. We had fun and it was nice to see Penn State play again. I guess in retrospect we got to see Penn State in their last bowl game for at least 4 years. There really isn’t anything like seeing a Penn State game in Beaver Stadium (and this wasn’t anything like that) but since it was a bowl game we still got to see many of the trappings of a home game including the Blue Band. We went back to the hotel and immediately took hot showers and a nap to try to warm up.