I mentioned in October that I was planning on participating in Pile on the Miles this November. Yesterday was the beginning of the second full week of POTM and I thought I’d give you a little recap of how it has been going. I got off to a slow start initially with only 3.5 miles in the first, short week. I had been hoping to start with a big number early on since I thought moving would make it hard to get in all 60 (!) miles. Last week I got in a very respectable 15 miles bringing the total to 18.5 miles. So I’m right on track to get my 60 miles if I can keep up the momentum through the move this week. The great news is that once I have moved I don’t have a job so I should have plenty of time for exercising…

In addition to POTM, I also mentioned that I thought it would be neat to take pictures of Pinnacle Mountain from the Two Rivers Bridge as the season changed. And I did.

This photo was taken on October 20

This photo was taken on November 4th

This one is from November 11th

It was grey and rainy when I went for a walk this weekend but you sure can see the leaves changing color in the three pictures.

Here are some other sights from my walks on November 4th and 11th.

Josh and I walked the bridge together on the 4th so we decided to take a few pictures near the park sign. 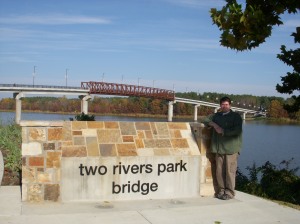 I tried to merge the pictures using my panarama program but they came out really weird!

I bumped into this little guy on my walk this weekend. I almost stepped on him, which he did not appreciate!

I am really going to miss this park and these bridges. They are really great places to walk and are a treasure for the City of Little Rock. I hope they keep taking care of them so they will last a long time. The next time I post photos of a walk will probably be from Grant’s Trail in St. Louis!