My last trip to State College in August 2011 for Josh’s dissertation defense was pretty boring. I was there over a week and the most interesting stuff we did was the actual defense and the birthday weekend trip to Hershey. The rest of the time I was there Josh worked while I hung around State College. This was obviously before I started the blog so I didn’t take a bunch of pictures of State College. Quite frankly, after living there for about 7 years I really didn’t need to take any more pictures of that place and if I am ever inclined to do so could probably find a bunch of old pictures to share. However, we did have some professional pictures taken of us. 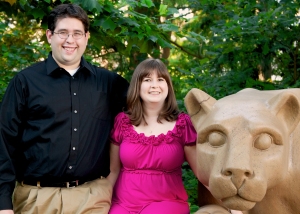 Since Josh and I met at Penn State, I thought it would be nice to have some portraits taken in some of our favorite spots on campus. I also thought we should do this while Josh still lived in State College because I just couldn’t envision us going out of our way to go back for portraits. I looked at several local photographers and settled on William Ames of William Ames Photography. We got great service and would definitely consider using him again. Our portrait session was about 2 hours long and included 4 or 5 locations. The photos look great and we are really happy with them. At some point we plan on hanging several up in our apartment.

The location at the top of our list was the Lion Shrine. This statue was the class gift of 1940 and is sculpted out of limestone. It is one of the most popular places to be photographed on campus and during graduation weekends there is always a long line. 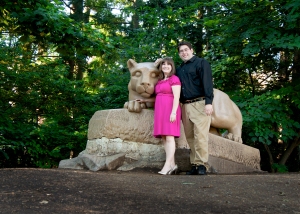 The shrine has been well loved and has one ear that has broken off several times. A couple of years ago they scanned the whole sculpture so if something happened to it and identical statue could be made. There is an infamous story that one homecoming Sue Paterno (wife of legendary head coach Joe Paterno) and the football moms painted the statue orange (Syracuse) in an effort to make the students think Syracuse had defaced the statue and increase school spirit. After that incident students began guarding the statue the night before the homecoming game. (The paint on the shrine was oil-based and had to be sandblasted off…)

Our second location was suggested by Josh and it was a great one: the Alumni Gardens. These gardens are outside the Alumni House. I never spent much time there but I am really happy with the pictures.

Next, we headed over to Old Main. Old Main was the first building on campus. Back when Penn State was just an agricultural high school, Old Main was the dormitory and school building. Now, Old Main houses the office of the University’s president and other administrators. Old Main had a bell but it has been replaced with a sound system. The bell rings whenever we win a football game as well as to mark the passing of time.

Out in front of Old Main is a sculpture of a compass. Josh suggested we take pictures inside the compass and they are definitely some of our favorites. 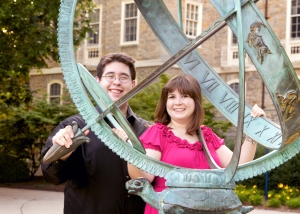 Our last location for the photo shoot was in front of the State Theater. The State Theater is an old theater located in downtown State College. When I first moved to State College, the theater was in the middle of being renovated. A few years later it was opened and it looks fantastic. The theater has a mix of programs but primarily hosts small concerts and shows independent movies. The State Theater was the location of one of our first dates and a They Might Be Giants concert where we really got to know each other for the first time. So I figured we had to get a picture there. 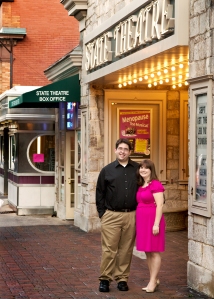 This portrait session was definitely worth the money. We have great photos of ourselves in a town that we called home for 6 or 7 years and a school where we both got degrees. This is something I am really happy we did and I think in the future we will look back on these pictures fondly.

3 thoughts on “Portrait Session on the Penn State University Campus”