Last year we went to the Saint Louis Comic Convention. We had a great time! I always meant to post about our trip and since the comic con is back this year, I’m going to throw back to last year’s comic convention.

We got there early and we still had to wait in line almost an hour just to get into the convention.

The convention was pretty much everything I expected. There was a large hall full of vendor booths. Josh bought a couple of posters and got autographs from some of his favorite comic book artists. We met Neal Adams, who was wearing a hidden Mickey tie! He was surprised I noticed and was happy to talk about something other than comic books for a minute.

We also decided to spend the big bucks and have our picture taken with Stan Lee! It was awesome. Here’s Josh’s take on it, “It was fun meeting Stan Lee. Josh was upset that he wouldn’t let any one touch him.” It was a little weird. We got in a long line and waited for like an hour. Then we were ushered behind a curtain, told to put our stuff on a table and that we weren’t allowed to touch or interact with Stan. The picture turned out really well. I would post it but we didn’t buy the digital copy and I have yet to scan it into the computer. If I ever get a digital version, I will be sure to update the post.

We also decided to get Morena Baccarin’s autograph. We were debating getting in line for one of the autographs but when we saw her line was empty we decided to show her some love. Josh is a huge fan of Firefly and at the time we had just watched Homeland’s first season. We decided to get her to autograph one of her Homeland pictures.

We walked all over the convention hall. The STL R2D2 core were there with a bunch of cool R2D2 robots. 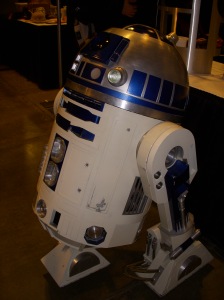 We also me Rampage, the St. Louis Rams’ mascot. The handler was pretty surprised that we wanted a picture with the Ram rather than waiting for the cheerleaders.

After we got tired of walking around we decided to check out some of the panels. Some of the panels had a ridiculous line to get in! We sat in one about the psychology of superheros. It was pretty interesting and Josh loved it. 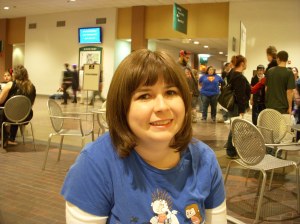 After the panel there was going to be a Q and A with Tom Felton, AKA Draco Malfoy. This was obviously one of the most popular panels and since we were already in the room we got excellent seats! We were both really surprized to find out how cool Tom Felton was. Here’s Josh’s take: “Draco Malfoy was surprisingly funny.”

We had a great time! Josh won a huge bag that was surprisingly useful for carrying around Josh’s posters. I also won a great shirt from the Host movie. I never saw the movie but I wear that shirt all the time. I wonder what hijinks we’ll get into at this year’s Comic Con!