I mentioned in a previous post that Josh and I have been making recipes from Delicious Disney. We’ve actually been at this for several weeks but I have been a total slacker about updating the blog!

For our second foray into the world of at-home Disney eating we decided to go with a classic: Canadian Cheddar Cheese Soup. This soup is a classic dish that is served in the Le Cellier Steakhouse in Epcot. I have never eaten though I have been to the restaurant. This is a recipe that can be found all over the internet (here’s a link to the recipe at the Disney Food Blog) and some really obsessive fans have even determine the exact type of cheese and beer that are used in the soup. We ultimately decided to buy the cheese but use some beer we had at home.

According to the internet, the cheese should be Canadian Black Diamond white cheddar cheese and the beer should be Moosehead Lager. We used 1/2 Black Diamond and 1/2 Cracker Barrel cheese and Harp. I also used some homemade chicken stock. 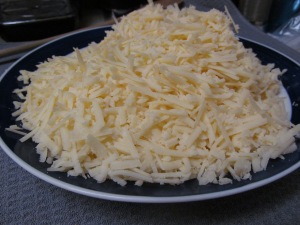 Look at all that cheese! I think this is more cheese than I eat in a year!

I started out by cooking some bacon which is always a great place for a recipe to start. The veggies were then added and cooked and some flour was added to make a roux. I think this next picture is actually after I added the chicken stock to the roux.

Then I added the milk and eventually the cheese. 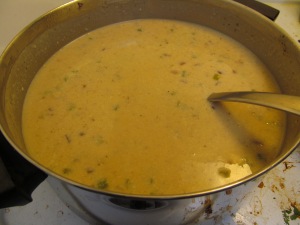 We made this soup as part of our Super Bowl celebration this year and unfortunately it took longer than I expected. I eventually served it even though I’m not sure the cheese was completely melted. We still didn’t eat until after halftime. We also got really carried away and got both pretzel sticks and sausages. It was way too much food! 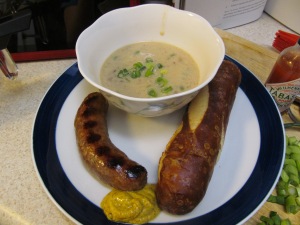 The soup was great! It is really rich and the recipe makes so much. I think the next time we make it we are going to try cutting the recipe in half. This is a recipe that we will probably make again.

One thought on “Disney Cookbook Challenge #2”