This is the last post about last year’s Christmas trip to Texas. Toward the end of our trip, Mom and Dad had to go to San Antonio for a work function and we all decided to drive out to the Shiner Brewery to take the tour. Charlie was working so he couldn’t come but Mom, Dad, Barbara, Josh and I all drove out in two cars. Mom and Dad then went on to San Antonio while the rest of us headed back to Houston with a quick pit stop in Lockhart, TX. 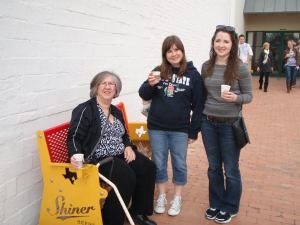 Shiner Brewery makes several kinds of beer including Shiner Bock. The brewery was smaller than I thought it would be for the quantity of beer that they produce and distribute. Josh, Barbara and I were very interested in the chemistry lab when we reached that part of the tour. We didn’t take any pictures of the interior of the brewery but it was really impressive. They must wash the kettles a lot because the copper was very shiny!

We learned a lot about the company and how beer is made. One of the more interesting tidbits was that the brewery gets its water from an underground aquifer. We also got to sample many of the beers that they produce. Unfortunately, they were all out of their Christmas ale!  After the tour and some beer sampling, Mom and Dad took off leaving Barbara, Josh and me to head back to Houston.

On out way back, we stopped in Lockhart, TX to get some awesome barbeque. Lockhart is known as the barbeque capitol of Texas due to three very old, historic restaurants: Blacks barbeque, Shmittys Market, and Kreuz Barbeque. We decided to stop in at all three. We didn’t take any pictures but we did enjoy the food. We got the barbeque to go so we could share with Charlie at dinner that evening. We got some brisket (I mean what is TX BBQ if you don’t eat brisket?), some ribs and sausages. We had so much food that there was some left when Mom and Dad got back from their trip!

We decided to get sausages in all three places so we would have something to compare. I know we decided on a favorite, but for the life of me I can’t remember which one! If you’re in central Texas looking for some awesome barbeque, I highly recommend a stop in Lockhart!

One thought on “Shiner Brewery Tour”