For the past two years I have noticed the pumpkin carving contest at work but I never got around to entering. As I’m leaving before all of the Christmas festivities this year, I decided I would enter the carving contest this year. I even talked one of my coworkers into participating with me (she’s also leaving and usually works with me on all of the Christmas mischief…)

The rules were simple: collect a pumpkin from the cafeteria, carve it and return the carved pumpkin for a chance to win a pizza party! Sweet. I had not seen the winners either of the previous years so I was not entirely sure what we were up against. We decided to make our pumpkins work related: Heather make a DNA pumpkin and I made a microscope with some differently shaped bacteria.

We employed the Pumpkin Master’s technique of drawing a design on paper (or computer), transferring the design to the pumpkin and cutting it out with saws.

Our pumpkins came out great! 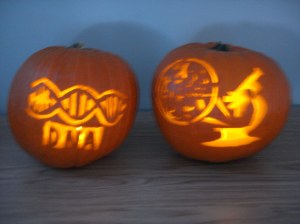 Sadly, we didn’t win anything but my pumpkin was one of the top 10. I didn’t take a picture of the winning pumpkins. It seemed like most of the other pumpkins had been carved or decorated so that they looked good with the lights on. The first place winner had made their pumpkin into Cinderella’s coach. They painted it silver and added some miniature pumpkin wheels and a glowing light inside the coach. The second place pumpkin was awesome but a little gross. It was a carving of a fetus inside the pumpkin. Even though we didn’t win we had a great time! 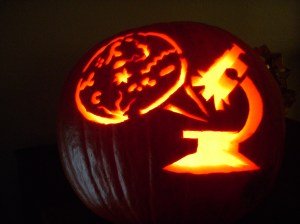