Sorry I have not posted for a while. I had a busy weekend celebrating my birthday with Josh! He drove down Friday evening in a terrible storm. Josh said there was tons of lightning and he even saw some hail! When he got here I opened my gifts from him and then we went to sleep because that is one long drive and I can’t imagine it in such bad weather! I had a great birthday and got a bunch of really awesome gifts from everyone. I got a new ipad case that I had my eye on from Josh, an apron (I totally asked for this specifically) from my parents and a neat gadget to hang the ipad in the kitchen from Barbara!

On Saturday we got up bright an early to head to the Zoo for the lion’s birthday party. I’ll write an entire post on that a bit later. It started to pour while we were there and we were forced to shelter in the reptile house. I think that is the most time we’ve ever spent in there! With no signs the rain was actually going to stop anytime soon, we left the zoo and headed to the mall for some window shopping. Sephora was doing Bare Minerals makeovers so I signed up! Then we went for lunch at a great Mexican place that has this amazing apple pie. We had been planning on going to the movies but it was just too much stuff for one day so instead we headed home to watch some football, play Angry Birds and take a nap.

After our nap we changed and headed to the Peabody to have dinner at our favorite restaurant, Capriccio Grill. We had our usual: lobster bisque for Josh and filet Mignon for me. We did spice it up a little as I had minestrone as a starter instead of a Caesar salad and Josh had the pork chop for an entrée (he rarely orders the same thing twice at a restaurant though he came close to getting the prime rib again.) Our meals were delicious as they always are at Capriccio. After dinner we headed home to watch SNL.

Sunday was a pretty lazy day and we didn’t really do much. We got bagels at Morningside but it was too rainy to go for a walk. Then we did some grocery shopping and Josh talked me into buying the ingredients to make applesauce. Josh wanted to take advantage of having a TV to watch the Steelers game. I took advantage of having Josh around to start packing up my books, dvds, and cds. Josh drove home that evening in another storm!

I took Monday off for my birthday (it is considered a holiday at my workplace) and I didn’t do anything! I was planning on working on the blog and making the blog into a book for my grandparents and doing a bunch of other things but instead I watched Downton Abbey all day! Which wasn’t a bad day to spend my birthday at all.

Since it is Wednesday, Pepper Picture day, and since this post has no pictures (sorry!) Here are a couple of pictures of pepper hanging out in my mostly empty cubby bookcase. 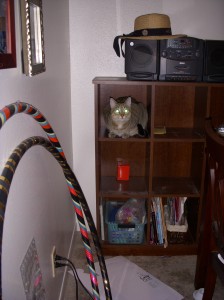 See! I really have started packing! 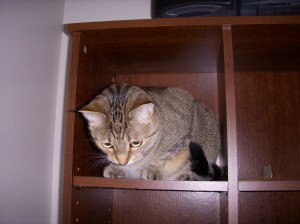