Josh and I have been living in different states for almost 3 years! We talk every night for at least 30 minutes, see each other as often as possible, and sometimes have long distance dates. This last item is something we made up and usually describes us sitting on the couch in our separate apartments watching the same TV program and discussing it while we are on the phone. And really, do you actually need to be in the same room to enjoy watching TV together? (The answer is no.)

It all began with a standing Saturday night date to watch SNL. In fact, I’m a little sad that Josh doesn’t have TV for the season opener of SNL this coming Saturday. I’ll likely be watching it while I talk to him so I’ll probably try to tell him what is going on. This happens occasionally with the Daily Show and I’m sure my descriptions are never as funny as the real thing. Watching TV together in this way is pretty funny because our feeds are almost always a few seconds off so one of us would constantly be asking why the other was laughing. SNL is really the most fun to watch when you can critique the sketches and musical guests with someone else. Our SNL dates were so successful we started renting movies with On Demand for special occasions like Valentine’s Day. We would usually choose a comedy that we could talk through as we were watching it. When we both had HBO we would sometimes watch a movie from their On Demand section as it was free for subscribers. This weekend we took it to the next level (mainly because Josh doesn’t have TV anymore) and took our long distance dating to the real world… 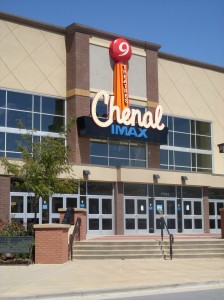 We saw a movie! I’ve been threatening to do this for a while and this weekend we had the perfect opportunity. I had heard that there was going to be a limited release of Raiders of the Lost Ark in select IMAX theaters nation wide. Since it was only going to be in theaters for one week we couldn’t just wait for the next time we see each other in two weeks. I’ve never seen Raiders on the big screen (much less IMAX) and I thought it would be so much fun that I was planning on going even without making it into a weird date. Don’t worry, we didn’t call each other or text during the movie as that is totally rude and unacceptable behavior. The biggest surprise to me was how much it really felt like I had a date. I was a little worried that this was going to be a really popular event (sadly, the theater was empty) and I thought I might have trouble getting tickets so I wanted to make sure that I actually got to the theater on time. Josh had similar issues as he wasn’t sure which theater was showing the movie. It is constantly surprising just how much we rely on the internet now and not having internet access at home is really annoying!

Anyway, long story short, Raiders of the Lost Ark was brilliant. In some ways it was like seeing it for the first time all over again except you already know all of the words. When the movie started there were a few focus issues and I was worried that the movie would not look good on the IMAX screen but within the first half hour those fears disappeared and I was able to get immersed into the movie.