While I was in St. Louis Josh and I visited Grant’s Farm.

That is Grant as in President Ulysses Grant. Grant’s farm was actually the farm owned by President Grant’s in-laws. He later took over the farm with the intention of retiring there after his presidency. It was originally a peach orchard but he turned it into a horse ranch as part of his preparation to retire there. Unfortunately, he never actually retired on the farm. His children had moved to New York and his wife wanted to be closer to the grandchildren. After a bad investment left him in debt to the Vanderbilts, he eventually gave them the farm along with all of his other properties in an effort to pay off the debt.

Eventually, Grant’s Farm was purchased by the Busch family (as in Anheuser-Busch.) It is now an animal preserve, petting zoo and home to one of the Budweiser Clydesdale’s stables. When you first enter the farm they take you on a short tram tour of the deer park.

The deer park was really impressive. They had several varieties of deer and elk from around the world. There were also some bison, buffalo, and longhorns. 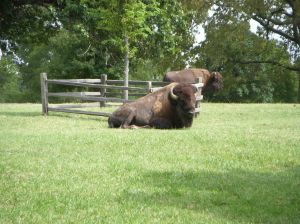 The tram takes you to a small zoo. There were two amphitheaters for animal demonstration, a carousel and a bunch of animals. The first stop was a huge pen full of goats. For $1 you can buy a bottle of milk to feed the goats. (This information explained why the value package included a slurpee and a bottle of milk. I was wondering just how many children were signing up to drink the milk!) 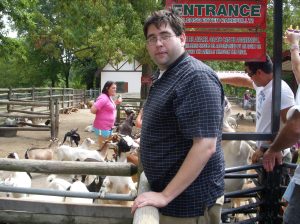 The goats knew all about the milk bottles and were really aggressive! 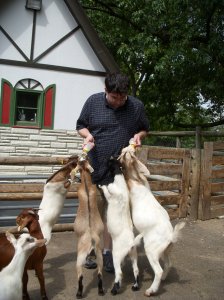 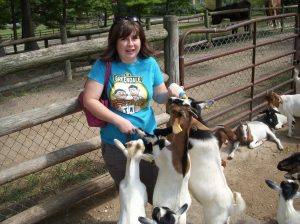 They also tried to eat my pants! Josh and I were covered in muddy hoof marks when we finally made it out of the goat pen.

The farm had a great variety of animals. They had three or four bald eagles. The eagles can’t fly anymore due to injuries they acquired while in the wild.

There were also about 10 parrots and a variety of owls and other predatory fowl. 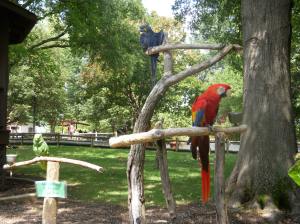 I’m actually going to end this post here, leaving you in suspense over which exotic animals we may have seen in the zoo and what kinds of delicious Anheuser-Busch products we may have tasted… Josh hates blog posts that are too long and I quite agree. So you’ll have to wait for the thrilling conclusion to our visit to Grant’s Farm later this week. 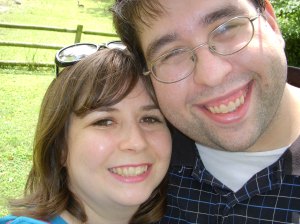